Inflammation of the esophagus Aqilion has chosen a clinical strategy based on the unique properties of the company’s drug candidate AQ280 (the Regulus program) and as the first indication clinical studies are planned in patients suffering from chronic inflammation of the esophagus, so-called eosinophilic esophagitis (EoE). The Phase 1 safety study with AQ280 in healthy volunteers started in August 2022.

The most common problem with EoE is trouble swallowing. Often the patient experiences food sliding very slowly down through the esophagus. In the worst case, the food can get stuck completely, which leads to the patient having to go to the hospital and be sedated in order for the food to be removed. It is a disease that leads to great discomfort and poorer quality of life for those afflicted.

EoE is currently an underdiagnosed disease, which is partly due to the fact that there has been no approved drug for treatment. As awareness of the disease increases and as new medicines will be offered, the market is predicted to increase substantially over the next
10 years.

Chronic inflammation of the intestine

Inflammatory Bowel Disease or IBD is a collective term for ulcerative colitis and Crohn’s disease. In addition, there is so-called unclassified colitis. Common to the diseases is that they are characterized by the body’s immune system attacking its own intestinal mucosa, which causes a chronic inflammation. Diarrhea is the most common symptom of IBD. Abdominal pain, bloody stools, weight loss and fever may also occur. As a rule, the disease is relapsed with high disease activity which is replaced by longer periods of low or non-existent disease activity. Depending on the severity, the relapses may require special treatment. The cause is unknown, but a combination of genetic predisposition and the body’s own immune system is considered to play an important role, as does the microbial environment in the gut.

The highest rates of IBD are assumed to be in developed countries, and the lowest are considered to be in developing regions; colder-climate regions and urban areas have a greater rate of IBD than those of warmer climates and rural areas. The prevalence of IBD increased substantially in many regions from 1990 to 2017. In 2017, there were 6.8 million cases of IBD globally. 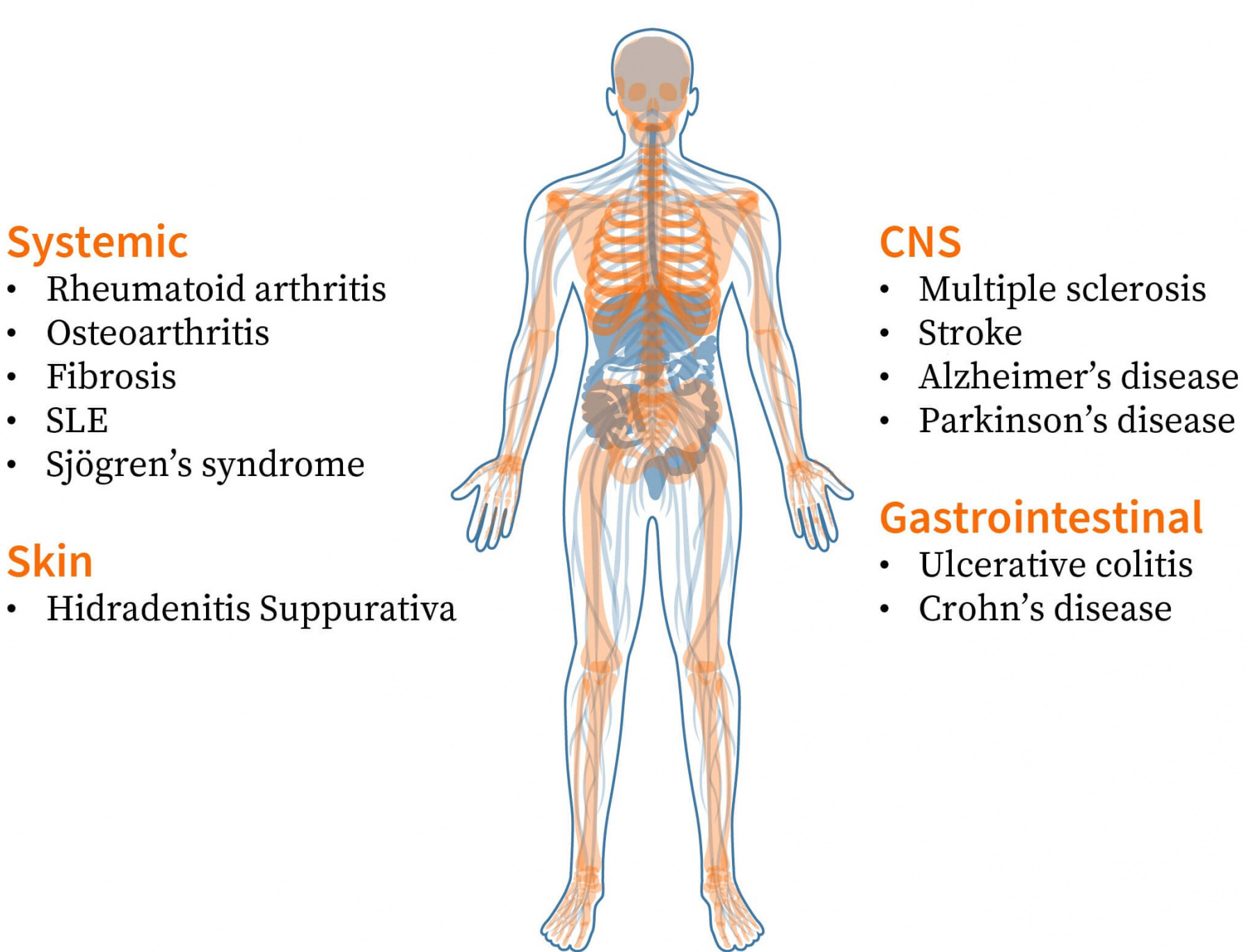 Aqilion’s Alnitak program has great future potential in a number of inflammatory diseases. We have chosen rheumatoid arthritis (RA) as one of the relevant diseases for the Alnitak program and we have managed to show efficacy data from preclinical studies in an established RA disease model.

There are a number of interesting indications where the Alnitak program has the potential to make a great difference. Not only in finding new treatments for indications that today lack good treatment, but also for groups of patients within a specific indication that do not respond to any treatment.